You are here: Home / News / Kamsarmax vs Panamax: The Workhorse bulk carrier of the Seas

Since my early Naval architecture University study days, I recall visiting along with my peers a 73.000 dwt ‘panamax’ bulk carrier in the vicinity of Piraeus port for an educational tour on board.

Looked like a massive beast when approached side by side from the transport boatbelow the main deck, with the ship that time being in ballast draft, and the gangway ladder being really breath-taking to climb.

This classic Workhorse is now destined to become obsolete.

There is a continuous need to increase cargo carrying capacity but keep certain length limitations.

The effort to stretch dimensions has some physical limitations imposed by the bulk trading, such that the beam of the ship needs to sized as per Panama Canal width (hence the name ‘Panamax’), and the length can be maximum extended by 229m, to be marginally able to call the Port of Kamsar in the Republic of Guinea on the west coast of Africa, a major bauxite loading Port.

During the period of 2012-2013, in view of the implementation of IMO EEDI regulations for new ships energy efficiency and due to the very high fuel prices of that time (i.e. with the Brent exceeding even 100 usd/barrel during certain period), shipowners first started to look on improved design solutions that offered better cargo intake and lower fuel consumption at same drafts and speeds.

Today, a modern benchmark Kamsarmax burns overall (engine+auxiliaries) about 29-30 tons/day at design draft and service speed of 14.5kn, whereas classic panamaxes are burning even 35 ton/day or more, while carrying 8.000-10.000 tons less cargo.

There are totally 2.159 such sized ships as we speak in the waters.

Of those, some are special purposed bulkers, such as Open hatch, Woodchip carriers or Self-Unloaders, abt 42 ships.

The pure dry bulk Workhorses (2.117 ships) are having the below distribution of size/age categorization: 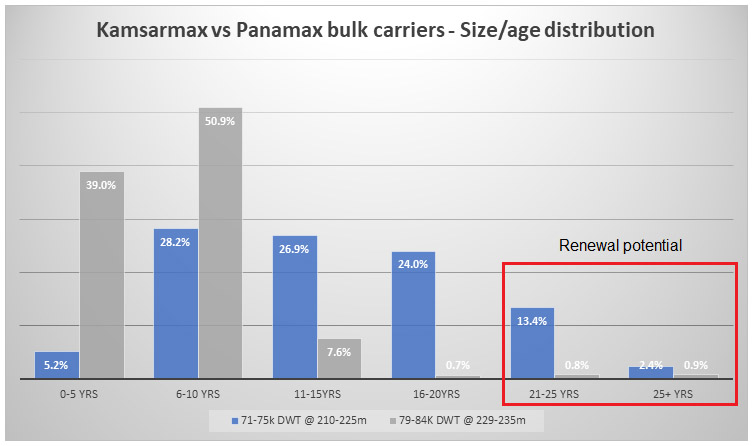 The ships on order stand at 261, a 12% of the existing fleet, considered as a healthy orderbook rate, provided that there are 190 ships older than 20 years old (8.8%), and if the bulk trade growth rate is abt 3-3.5%, this is left to be served by 71 ships as surplus to be delivered in the next 1-2 years from the shipyards (abt 5.7M tons of cargo capacity will be added).

36 ships are older than 25 years old already, so a 2% of the fleet may be removed anytime as we speak, even if 83% of this overaged fleet belongs to end users that have less commercial incentive to offer quality competitive ships in the broader market.

Most of the 20+ years such ships are on the panamax sized category (75k DWT @ 225m LOA), except some Self-Unloading vessels or Lakers or special type of bulk carriers that have larger length and specific commercial purposes.

What can be the Next Generation Workhorse then?

As we stand, the ratio of modern, ‘eco’ featured ships over older conventional ships (criterion being the proportion of electronically controlled engines versus mechanically controlled engines that offer the majority of fuel saving differential, i.e. 7% or over) is a mere 19% (abt 450 ships), especially those built during 2015 and after, where we see mostly either MAN 6S60ME-C8 or WinGD 5/6RT-Flex58/50T main engines on board.

Therefore, a large majority of the fleet (81%) is still carrying old technology, has poor energy efficiency and old design features!

Old mechanically controlled engines are more difficult and more costly to be converted/upgraded for more environmentally friendly fuel types burning, such as LNG, LPG or methanol.

While at the same time, ships ageing from 5 – 10 years old (we are talking about 846 ships…) must have at least 10-15 years of residual commercial value, as they are active assets that can’t be just withdrawn from the market in the name of environment protection (unfortunately…).

These ships are also in the balancing edge when it comes to Scrubber technology utilization, since a total minimum retrofit cost of abt 2M-2.2M USD for a 2nd hand vessel value of max abt 15-20MUSD is a 10-13% of the ship cost and payback on basis of 200 USD/day spread between HFO/VLSFO after 2020 at current sailing speeds of 11-12.5kn bring the ROI at 2.7-3 yrs, so they are to be left with more expensive voyage costs for their rest of their lifetime.

Therefore, we will be starting soon to see 2 and 3 Tiers of ship qualities and performances over same segment/category, which is truly providing new dynamics in the cargo shipping markets.

The Next Generation Workhorse can be:

Please contact Finocean team for receiving more details on the above ship types analysis, and for working together on a customized solution that will improve your next newbuilding Investment.

The data presented in the article above are stemming from information collection available from numerous market sources and are based on safe estimations, intended to demonstrate the proportional potential of the specific market.

This site uses cookies. By continuing to browse the site, you are agreeing to our use of cookies.